Cattleya orchids (sometimes referred to as Corsage Orchid) are ephytes (or air plants).

They prefer warm temperatures and high humidity, and are known for their large, stunning (and sometimes fragrant) flowers.

The huge blooms can reach up to eight inches across, and come in a wide range of colors and patterns.

Since cattleya orchids are so beautiful and easy to grow, they are one of the most hybridized orchid species - there are thousands of hybrids registered.

Most cattleya species produce one new flush of growth 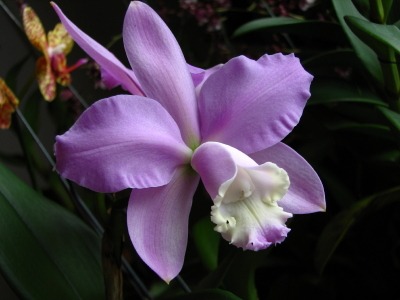 Some hybrids will bloom twice annually.

Flowers will vary by species. Cattleya orchids may produce just a few showy flowers or bunches of small, wax-like flowers.

You can tell if your cattleya orchid is getting enough light by monitoring the color of its leaves:

Light Yellow-Green Leaves – Too much light.

Medium Green Leaves with a Slight Yellow Cast (Apple Green) – This indicates that your orchid is receiving the ideal amount of light.

Fifty to eighty percent humidity is ideal for cattleya orchids. This can be provided by placing the orchid pot on a tray of gravel filled with a small amount of water or by placing a humidifier in the room or greenhouse.

Allow soil to become slightly dry between watering. Your orchid will need more water in the summer due to the warmer temperatures (soil will dry quicker).

The best time to divide is when the plant has more than seven pseudobulbs. Divide by separating into clumps of three or more.


Note: Until a plant has at least six mature pseudobulbs, it should be put into a larger pot and not divided.  If dividing a plant, three to five pseudobulbs per division are required.

Can last many years when propagated by division.

This species group is large and varied. Larger species tend to be easier to grow than their miniature counterparts (mini-catts). Flower form, plant size, and fragrance vary greatly.

If possible, visit your local nursery or talk to a local orchid specialist for advice on choosing the best orchid.

Uses and Display Tips
A windowsill in a bright, sunny location.

Return from Cattleya Orchids to Types of Orchids