The Kaffir lily, also referred to as Clivia miniata and Fire Lily, belongs to the the amaryllis family (Amaryllidaceae) and is native to South Africa.

The vibrant orange flowers appear mainly in early spring to summer; however they can also sporadically at other times of the year. Hybrids have broader leaves, thicker stems, and the flowers can be yellow in color.

Clivia miniata will thrive best in organic well-drained soil, at a 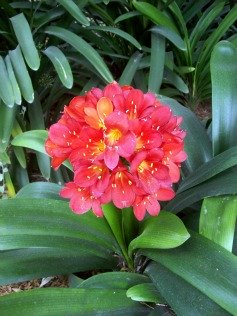 Plant the bulbs in the fall or spring - deep enough to almost bury the white part of the stem. Cover the roots with a thin layer of soil.

Use a potting mix that drains well and that is composed of at least 50% organic matter, such as peat moss or fir bark. Most potting mixes sold at garden centers meet both requirements.

In the spring, fertilize with a water-soluble fertilizer every two weeks for the next six weeks. The Fire lily’s growth peaks from early spring through the fall.

While actively growing, water and fertilize regularly. Afterwards, water sparingly. The soil should be slightly dry between deep irrigation. The Kaffir lily can grow up to two feet tall.

Kaffir lilies grow year round in sub-tropical and tropical locations 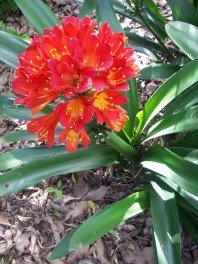 (USDA Hardiness Zones 9 – 10). If you live in a cold climate, it can be grown indoors as a houseplant.

Clivia miniata grow best in bright light (little or no direct sun). You can display your plant outdoors during the summer in a shady location. Just remember to bring it back in before the first frost.

During the growing season, water Clivia miniata when the top inch of the potting mix becomes dry to the touch (water should drain freely from the hole in the bottom of the pot).

Do not allow soil to remain constantly wet – this can cause rot. Only water the plant when the is dry to the touch (to approximately 1 inch deep).

After your Fire Lily has bloomed usually from April to August), fertilize it monthly with a water-soluble fertilizer (20-20-20) mixed at 1/2 the recommended strength. Stop fertilizing by mid-September.

Cut flower stalks off at the base after the blooms have faded. This will prevent the plant from expending energy on the production of seeds. Remove any leaves that wither and turn brown.

Clivia miniata bloom best when root bound. As the plant grows, some of the fleshy roots may push their way up above the soil – this is normal. Repotting is necessary only every 3-5 years.

After the plant blooms, remove the lily from its pot and place it in a new container that is 2 inches larger in diameter than the old one. Use a potting medium that drains well, one that is composed of at least 50% organic matter, such as peat moss or fir bark.

Most potting mixes sold at garden centers meet both requirements.

The Kaffir lily can be propagated from seed or by division. If propagating by division, wait until after the plant has bloomed (usually in late spring or in early summer). The offset should have at last three or four leaves of its own.

Gently remove the offsets from the mother plant. Include some roots. Plant the offset by itself in the pot.

When propagating from seed, plant in a blend of perlite and moist peat moss. Preserve the moisture by covering the pot with a plastic bag and securely tying with a rubber band.

Place in indirect sunlight, where the temperature is 50 - 59°F / 10 - 15°C. If necessary, use a fluorescent light. Germination will take approximately one to three months.

Flowering Period
The Kaffir lily blooms in early spring. In the fall or early winter, give the plant a “rest” period. Keep the plant in a dry condition for about six to eight weeks (at a temperature between 50 - 59°F / 10 - 15°C.

You can move the plant outdoors for about one month before the first frost, and then bring it back inside – keeping it in a cool room until mid-winder.

Water the plant only to keep the leaves from wilting. When you observe a flower stem emerging, gradually increase the water. Move the container to a location where you can keep the temperature to at least 50°F / 10°C at night and 70°F / 21°C during the day.

The spectacular trumpet-shaped flowers will bloom in March or April.