Phalaenopsis orchid species, also known as moth orchids, are one of the most popular orchid species for growing in the home or greenhouse.

The arching sprays of elegant blooms make them popular accents for interior décor.  Several blooms appear on each flowering spike.

A second one can emerge when the first one is cut. Broad green leaves spread outward from the bottom of the plant.  Full grown plants can flower often; sometimes a few flowers will bloom throughout the year.

The main season is late winter to early spring. These orchids typically thrive in average indoor temperatures and conditions. Some hybrids can be forced to rebloom by cutting the tip off after the initial flowering.

Elegant phalaenopsis flowers range in size from 2 – 5 inches in 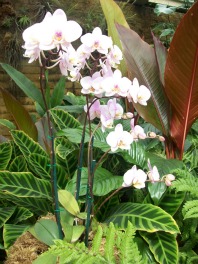 They come in a variety of colors, such as white, pink, lavender and yellow.

Blooms can be solid in color, or marked with stripes, spots, or both.

Sprays of small flowers resemble dainty butterflies in some species.

Individual blooms can last as long as 3 months.

Flowers open sequentially at 2-5 day intervals along an arching spike.

Supplemental light can be provided by using fluorescent lights. Amount of light should mimic the length of a normal day. Ideal placement is one foot above the orchid.

Humidity is essential. Fifty to eighty percent humidity is ideal for phalaenopsis orchids. This can be provided by placing the orchid pot on a tray of gravel filled with a small amount of water or by placing a humidifier in the room.

Greenhouse should also provide sufficient humidity – just be sure that there is appropriate circulation.

Fertilize every third watering during spring and summer - fertilizer should be mixed at ½ the strength. Feed every three weeks in fall and winter – dilute fertilizer to ¼ the strength.

Phalaenopsis orchids do not have any water-storage organs (psuedobulbs); however, they can store some water in their leaves. During the growing season, water this plant when exposed roots turn silvery white (usually weekly). Soil should be slightly damp.

Most moth orchids develop small plantlets, called keikis, on the flowering spike. They can be cut off and potted after they have three leaves and 3 in / 7.5 cm roots.

Note: The best pot will be slightly larger than the current one, one large enough to allow the orchid to continue to grow, as well as allow for air circulation around the root system.

It should comfortably accommodate the roots without crowding. An orchid pot that is too large allows moisture to remain in the soil mix and will cause root rot.

Phalaenopsis orchids can last many years when propagated from plantlets.

Moth orchids are available in a variety of colors and patterns. Established varieties are less costly than newer hybrids.

Phalaenopsis orchids are elegant when planted in a simple flower pot, which can be displayed in a location that receives moderate to bright light.

Return from Phalaenopsis Orchid to Types of Orchids